We are dedicated to making players better golfers through the development of club technology and psychomotor skill enhancement to maximize the golfer’s enjoyment and success. 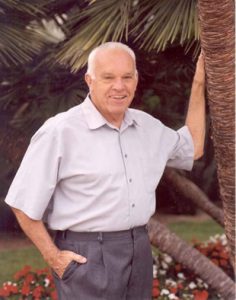 Prescription Golf was founded by Lanny L. Johnson, M.D. Dr. Johnson is an internationally recognized orthopedic surgeon, one of the pioneers in arthroscopic surgery. He is an inventor, holding over 40 U.S. and foreign patents related to surgery. The most notable was the co-invention of the motorized instrumentation used daily world wide, even now, more than 30 years later. The longevity of this invention is unprecedented in surgery.
He has been a golfer since age 11. He played on Royal Oak High School’s record setting Michigan High School State Championship team in 1951. He had four varsity letters in swimming at Michigan State University and one letter in golf. He played his senior year on the college varsity golf team. His best competitive score was 2 under 70 versus Notre Dame. His best non-competitive score was 69. He had 3 hole-in-ones, the longest of which was 265 yards with a three wood in 1955.

He served in the United States Air Force Medical Corps as an orthopedic surgeon at Wright Patterson Air Force Base, Dayton, OH.

He was in private practice of orthopedic surgery in East Lansing, MI for more than 30 years. He is author of numerous scientific articles and several textbooks. He is a popular lecturer.

He was founder of orthopedic surgical company he held for 20 years and subsequently sold to large international company in 2002.

Now retired from clinical practice since 1995, he is devoted to research and development in medicine.

How come the golf business? As irony would have it he slipped on ice in January 2004 and dislocated his left shoulder. Subsequently he had rotator cuff surgery. Being out of golf and most other activities his recreation involved bringing forth these ideas about putters and putting, the only golf stroke he could do for months.

He transported the principles learned in the art and science of surgery to golf. The surgical instrumentation development methods were applied to golf club design. The psychomotor skills from surgery were implemented in putting methods.

Although he does not hold himself out as a professional instructor, he now holds credentials as a PGA Tour Instructor which has afforded him opportunity to have discussions with over 100 PGA Tour golfers. Dr. Lanny, as he is known on the Tour, has validated the principles of Alternative Medicine for Putting®. These experiences provided the material for the book There is More to Putting than Meets the Eye®.

It is our hope that these unique putter designs and ideas about putting provide recreation for the viewer as much as they did for the inventor. These concepts are protected by at least one of US Patent No. and additional patents pending. We hope that the novel design ideas challenge your thoughts and Prescription Golf’s clubs improve your game. We hope the golfers will avail themselves of the psychomotor skills developed with our book There is More to Putting than Meets the Eye® .

A Doctor Johnson autographed copy of the book may be purchased for $50 with personal contact at drlannyjohnson@gmail.com. Details will be explained by return correspondence.

It is our hope that these unique patented golf grip, golf glove and putter designs provide recreation for the viewer as much as they did for the inventor. These concepts are protected by at least one of following US Patents:

We hope that the novel design ideas challenge your thoughts and Prescription Golf’s clubs improve your game. We hope the golfers will avail themselves of There is More to Putting than Meets the Eye® .

Note: We no longer sell putters.

Attention: The information and items listed on this site are for those interested in purchasing the intellectual property rights or for prospective distributors. Interested parties should contact Dr. Johnson directly at LLJMD@aol.com or via (517) 285-8112.